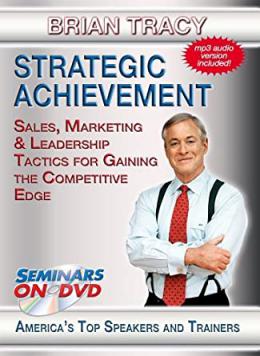 Be the first one to write a review
In this content-rich training seminar, highly acclaimed business speaker Brian Tracy shows how to apply battle-proven methods to achieve victory in the world of business. He draws on powerful success strategies used by famous military and business leaders throughout history.
$69.95 in stock
FREE SHIPPING

Sharing idea after idea, Brian covers a variety of thinking tools that can help you to overcome adversity, live with greater focus, sell yourself more effectively, market your products & services with greater efficiency, and more. Youll walk away with a practical blueprint for achievement that can be immediately applied to your business and personal life.

Brian Tracy is one of the worlds most powerful and sought-after seminar leaders, speaking on personal and professional performance. He has traveled and worked in more than eighty countries, and speaks four languages. He is a New York Times bestselling author, having written more than thirty-five books that have been translated into twenty-four languages. He has appeared on countless television and radio shows, and is featured regularly in major publications across the country, and overseas. He has also conducted high-level consulting assignments with several billion-dollar-plus corporations in strategic planning and organization development. Brian is married, with four children, and is headquartered in Solana Beach, California.