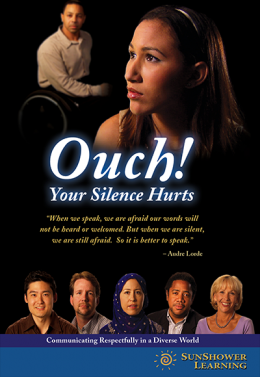 Be the first one to write a review
Ouch! Your Silence Hurts challenges viewers by asking, How will you personally respond next time you witness somebody being treated with disrespect? You have a choice: Passive Bystander or Pro-active Ally." In a powerful and compelling way, this 9-minute video motivates bystanders to use their voice to speak up for respect on behalf of someone else.
$595.00 in stock
FREE SHIPPING

This Program is Also Available for Online Video Streaming!

Do you ever stand by silently when you feel you should speak up?If so, your silence hurts. Many people say they want to speak up when they see others stereotyped, disrespected, or demeaned. But they stand by silently because of discomfort or the fear of saying the wrong thing. They may turn away thinking “who am I to get involved, this isn’t my business.” In fact, as a bystander, you ARE part of the conversation. You are the audience. Your silence allows the disrespectful behavior to continue.

Ouch! Your Silence Hurts…. challenges viewers by asking, “How will you personally respond next time you witness somebody being treated with disrespect?” In the Ouch! video, you’ll hear about the role of the silent bystander: When you hear a disrespectful comment or joke, you have a choice: Reinforce it by laughing or joining in. Tolerate it by saying nothing, which is what most people do. Or speak up and become an ally, the hardest thing of all.

You may think that by saying nothing you’re making things better, or at least not making things worse. But sometimes silence is not golden. Your silence sends a message that you agree, or at the least you don’t object. Is that the message you want to send?

How to encourage the silent bystander

In a powerful and compelling way, this 9-minute video motivates bystanders to use their voice to speak up for respect on behalf of someone else.

Why is OUCH important?Have you ever heard someone say something biased or demeaning and you didn’t know whether to speak up? Have you ever said something unintentionally offensive and wished you could take it back? If you answered “yes” to any of these questions, this video training program is for you. OUCH! That Stereotype Hurts will help you gain the skills and confidence needed to successfully communicate in a diverse world.In a direct and powerful way, you will experience the impact of stereotypical comments, jokes and emails.

The program will help you explore why people don’t speak up against stereotypes and other biased behaviors. In the last section, the program offers six techniques for speaking up without blame or guilt.

The OUCH! training streaming package is customizable and can include: