Unbreakable Laws of Self Confidence 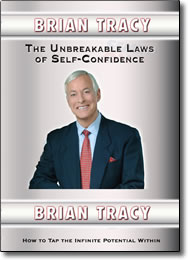 Be the first one to write a review
Self-confidence is the key to success in all areas of life. It determines how much money you will earn, how happy you will be, the quality of your relationships, your ability to attract the things you want, and more. Your self-confidence is everything! The challenge is that most of us were programmed with messages that lower our self-confidence from a very young age, and this old programming interferes with our ability to conquer our most coveted dreams and goals.
$69.95 in stock
FREE SHIPPING

Additional information about Unbreakable Laws of Self Confidence

In this powerful session, youll learn all of the most critical laws for literally reprogramming your mind and boosting your self-confidence to a whole new level.

Brian Tracy is one of the worlds most powerful and sought-after seminar leaders, speaking on personal and professional performance. He has traveled and worked in more than eighty countries, and speaks four languages. He is a New York Times bestselling author, having written more than thirty-five books that have been translated into twenty-four languages. He has appeared on countless television and radio shows, and is featured regularly in major publications across the country, and overseas. He has also conducted high-level consulting assignments with several billion-dollar-plus corporations in strategic planning and organization development. Brian is married, with four children, and is headquartered in Solana Beach, California. Download Note Guide

In this program youll learn: